Clarinet Duo Performance with the Druckers

Naomi Drucker Display of her Career

A momentous gathering of former and present students spanning almost 60 years converged on this Elk's Club with the Ballroom named for her father Monroe Lewis, celebrating an accomplishment of teaching of the Clarinet.   The event was attended by over 100 past students and friends out to honor her accolaides as teacher and noted performer.  As stated in her remarks, the calling to teach and make a difference for students was a major purpose and it has affected so many who have studied with her and made tributes as a teacher and a friend who made life more meaningful. During this afternoon, she and her husband Stanley Drucker, Solo Clarinetist in the New York Philharmonic,  performed two Duets, by Mozart, and Meyer Kupferman's Double Features for 2 Clarinets.  It is clear that both as a team as performing inspired everyone who came as supreme role models to make everyone want to achieve beyond their own levels of playing.  After the Drucker Duo performance, participants pulled out their Clarinets to perform a work for 4 Clarinets by Irwin Schwack, all 50 of them.   A feast followed and a special Cake was cut offered by Buffet-Crampon with Chris Coppinger. US Northeast Manager.  Archival displays spanning Naomi's career were presented for the students to see, along with CD's of the American Chamber Ensemble featuring the music of American and Long Island composers. 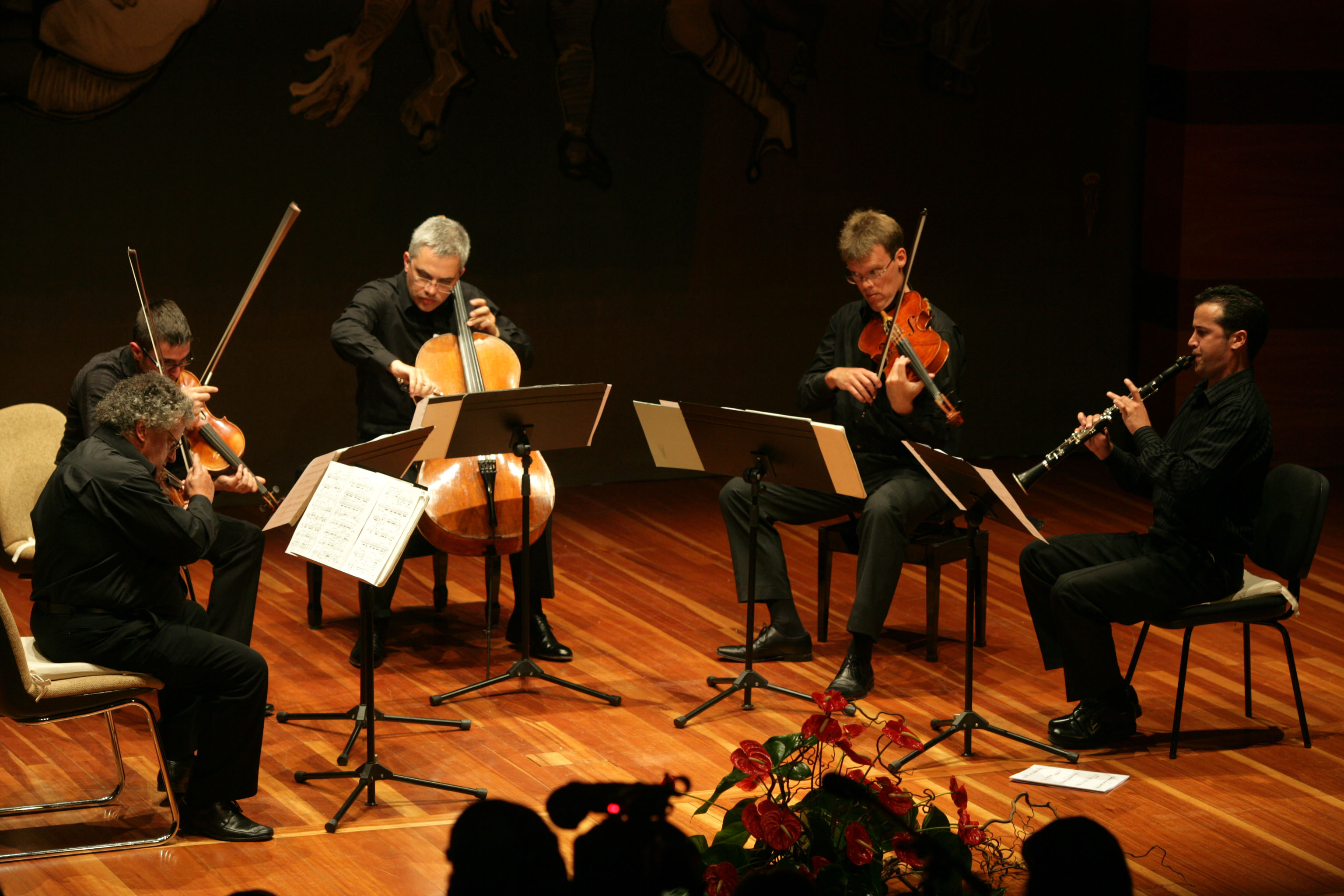 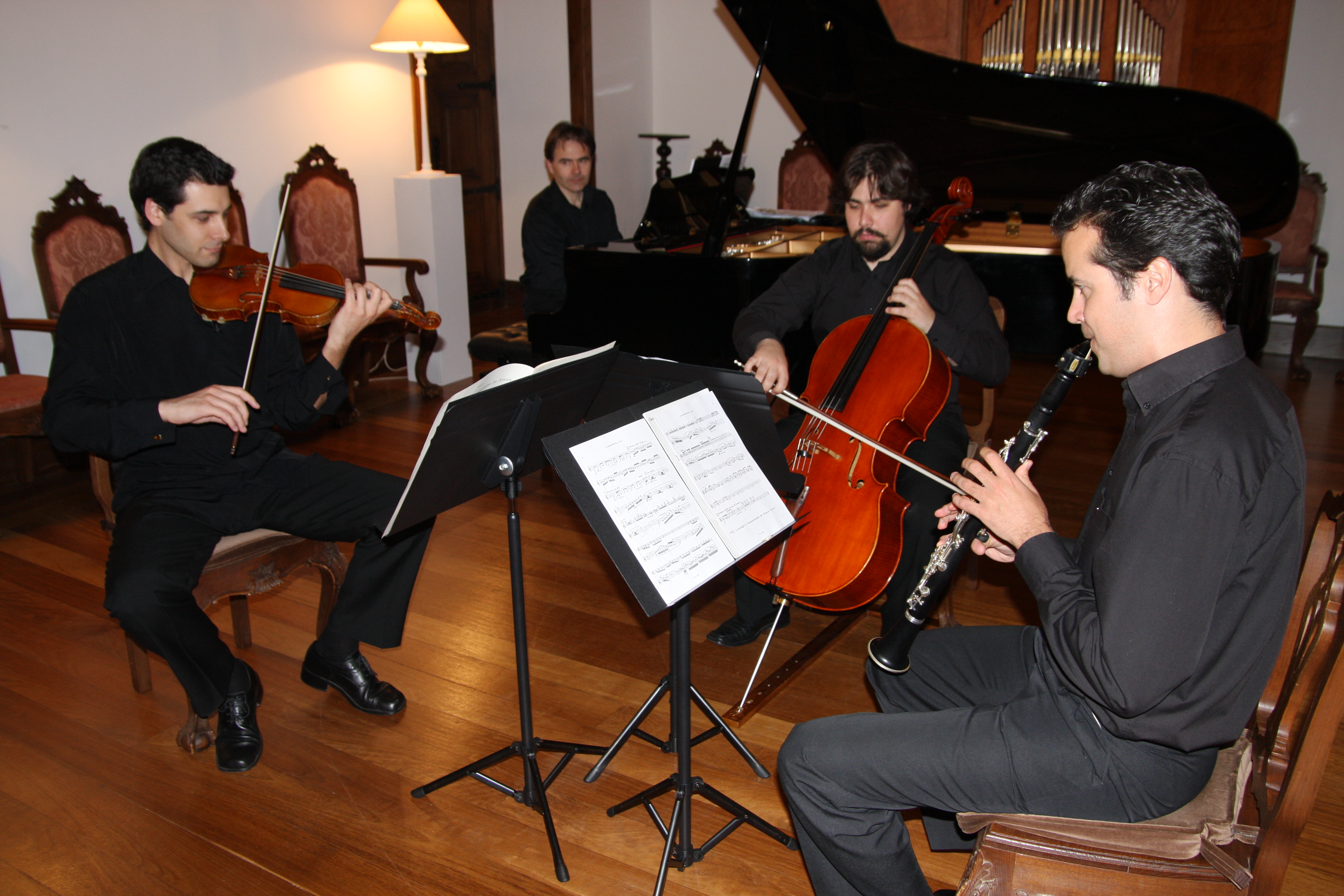 Cristo Barrios performs with the Arditti String Quartet. in the World premiere of Blai Soler's "Clarinet Quintet"  and performs in the Olivier Messiean Anniversary Festival

V Cajacanarias Contemporary Music Festival. Cristo Barrios performed with the Arditti String Quartet. They made the World premiere of "Clarinet Quintet" by Blai Soler at the Auditorio Alfredo Kraus (Gran Canaria-Spain), as well as string quartets by Carter, Dusapin and Lachenmann. They also played the same programme at the Auditorio de CajaCanarias (Tenerife). Great audience acclaims in both concerts.

Oliver Messiaen anniversary. Concerts took place at the Esposende main auditorium, at the Salao Medieval da Universidade do Minho (Braga) and at the Palacio Foz (Lisboa). The repertoire included pieces by Messiaen (Quartet for the End of Time) and Stravinsky (The Soldiers Tale). Cristo played with the Medina Ensemble (Nuno Soares, violin; David Cruz, cello y Youri Popov, piano). Big success at the three concerts, specially in Lisboa. Cristo will make another tour in Portugal with this Ensemble next November 2008.

A major Premiere of a newly discovered and reconstructed early Concerto for Clarinet and Orchestra Henri Joseph De Croes (1790) (Brussels 1785- Regensburg 1842) performed by Vlad Weverberg  with the Orchestra Collegium Instrumentale Brugense, Ivan Meylemans conductor took place in Belgium.  Information about the work is forthcoming; Soloist Vlad Weverbergh, a prominent Clarinetist in Belgium and a student of Walter Boeykins performed to high standard.  The concert was broadcast and recording will be released at a later time.  Information about Mr Weverbergh below.

Vlad Weverberg and Collegium Instrumentale Brugense under the direction of Ivan Meylemans performed this work in Izegem (Belgium) on 11 May 2008.

His clarinet concerto of 1790 is his most important work.

His work is in typical style for the era: light, fitting the “leisure class” and atmosphere in the European courts at that time.  He wrote the clarinet concerto around the same time when Mozart wrote his concerto. It is 23 minutes long and contains 3 parts: Allegro, Romance Andante and Rondeau Allegro.

The conductor score was not available and the reconstruction of his clarinet concerto was based on loose score sheets. The 21 bars of rest in the last movement for the solo player are fairly unusual and pencil marks on the score sheets of the clarinet solo where indicating that improvisation was possible.

With digital aids, I have been able to complete the music score.

A clarinet - piano edition will be ready at the end of June (info: www.goldenrivermusic.be).  Licensed material for orchestra is available. Info: mielpieters@telenet.be

More info about the soloist: www.vlad.be

Passion for 18-century music.
Creations in Festival of Flanders and for Radio Klara.

Next project is a re-creation of a duo concerto for violin and clarinet round 1790.

Despite his youth - born in 1977 - Vlad Weverbergh could easily be counted as one of Belgium's leading clarinettists. His phenomenal technique, masterly control, enviable musicality and stylistic versatility have won him praise from all quarters. A series of brilliant competition results at both Belgian and international venues have served to underline his talents. Vlad Weverbergh won the Young Tenuto competition (Belgium 1993), the Aurelian Octav Popa International Competition (Romania, 1993), the Fedekam National Soloist Champioships (Belgium 1994), the Concours Européen pour Jeunes Solists (Luxemburg, 1994), the Pro Civitate prize (Belgium 1995) and the Tenuto prize (Belgium, 1997). In March 2000 he was awarded the “Link” public prize in Tilburg (Holland).
Vlad Weverbergh is a graduate of the Royal Music Conservatory in Antwerp, where he studied with professor Walter Boeykens. He also studied with Aurelian Octav Popa in Brasov, with Guy Deplus in Nice and with the Melos String Quartet in Oberstdorf. In 1996 he attended the Interpretationskurs under Hans Deinzer at the Europäische Musikakademie in Bonn. He has performed as a guest soloist with the VRT Philharmonic Orchestra, Prima la Musica, Collegium Brugense, the Symphonic Orchestra of the Music Conservatory of Antwerp, the Hungarian Radio Orchestra, the George Enescu Philharmonia and the Philharmonia Hungarica. He has worked with conductors such as Philip Elis, Koboyashi Ken Ichiro, Christian Mandael, Robert Groslot, Patrick Peire, Dirk Vermeulen and Daniele Callegari.
Vlad Weverbergh brings his dash and gusto to the entire clarinet repertoire, be it Mozart, Weber, Rossini, Debussy, Stravinsky or contemporary works hot from the composer's pen. His eclectic musical taste is perfectly expressed in Trio Dor, the ensemble that he founded in 1993. Trio Dor (“dor” being a Romanian word roughly meaning nostalgia or longing) combines a highly personal mixture of original compositions and standards from the klezmer, tango and musette repertoire, with plenty of room for improvisation. In 1998, the group won the Chamber Music Beginner's Prize awarded by Jeugd en Musiek. Not surprisingly so, this award led to successful tours in Romania, Sweden, the Netherlands, France, Austria, Great Britain and South Africa. Trio Dor has released two CDs. Vlad has also made recordings for Belgian, Dutch, Romanian and German TV and radio stations. In September 2001, he released his first recital CD – “Première Rhapsodie” (on the Etcetera label) - with pianist Yasuko Takahas. Apart from compositions by Debussy, Stravinsky, and Poulenc the CD also features lesser known works by the French clarinettist Louis Cahuzac, and a world premier of Four Greek Songs by the Maltese composer Charles Camilleri.
Vlad Weverbergh also plays with the trend-setting musical ensemble “Champ d'Action”. He has furthermore been invited to join “I Solisti di Vento”, an ensemble of the best Belgian wind instrumentalists. Up to 2002 he lectured on chamber music at Antwerp's Royal Music Conservatory. Currently, Vlad Weverbergh teaches the youngest generation of Belgian clarinettists at the municipal conservatory of Bruges (Belgium). 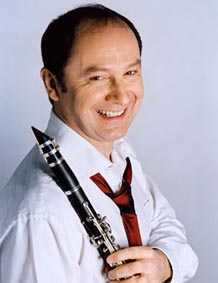 The second Major Master Class and Performance event convened at this major University featuring from Paris star Soloist and Solo Clarinette in the Paris Opera Phillippe Cuper, one of the most accomplished French Clarinetists, well connected with the French School of Playing with teachers such as Guy Deplus.  On 6 May, a Master Class convened with advanced students covering a whole range of literature with intense critiques and coaching, making for a noticeable change in the playing of these students.   This is the 2nd such Master Class project, initiated by Professor Steve Cohen, retired Solo Clarinetist in the Louisiana Philharmonic in New Orleans, the 1st Class with Karl Leister from the Berlin Philharmonic.  Information about the Internet aspects posted above, and is worth accessing for one's improvement.  For those who cannot travel to important events as this, this is a great answer for everone.

The second of a series of concerts of this elite ensemble consisting of many of the finest Clarinetists from the Chicago area, many of whom are College teachers and professional performers, took place at Northeastern Illinois University.  The ensemble was conducted by famed Associate Principal Clarinetist in the Chicago Symphony John Bruce Yeh, with soloists Lawrie Bloom, Bass Clarinetist in the same Orchestra, and Charlene Zimmerman, Solo Clarinetist in the Chicago Lyric Opera, performing the CM von Weber Concertino Op 26 arranged for the ensemble. Program is posted above with details about the group.  Credit is due to the Artistic Director Rose Sperrazza, Professor of Clarinet at this University.

Hasty, His Life, Performing and Teaching Presentation with Panel of 6 of his major students as presented by Elizabeth Gonglogson, Professor at University of New Hampshire

Over 16 events were held including several Master Classes convened with 3 given by Mr Hasty, and the others given by Michael Webster, David Etheridge, covering Performance of the Mozart Clarinet Concerto,  Maurita Murphy Mead, covering Choro Brazilian Music, Russell Dagon, Elsa Ludewig Verdehr,   Gallery inserts showcase the Classes with handouts and concert programs, which are self explanatory.  Quality of all presentations were star class, and students performing were well advanced and showing the Hasty quality of Clarinet schooling from their teachers, who passed this valuable package of concepts and disciplines to their students.  Performance consistency was almost scary.  As Mr Hasty said near the end of the conference, the students are in good hands.

An Honors High School Clarinet Choir under Don Nathan, consisting of audition only students from the Ohio region performed with near professional acclaim.  One of the high points of this Festival and a prime mission of the Johnstones was a Composition Competition consisting of 7 contestants reduced to 3, and then a final winner.  They performed their concerts with diversity of compositional style, including avant garde.

A world premiere written for the Verdehr Trio was performed written by Daniel Pertuu named 'Rhapsody' , commissioned for this Festival by the Johnstone New Music Fund.  More information on the Clarinet Premiere Page

Credit is due to the sponsors of this event, Zoe and Jack Johnstone, who totally underwrote the entire Festival.  Their Woodwind Master Series is held annually showcasing one of each of the Woodwind Instruments in the same fashion as presented here.  James Pyne is responsible for the artist logistics and programming of this conference, which was balanced in content and consistent.  There was not a dull moment during the entire event.   The entire week was nostalgic for everyone noting the effects of the teaching of this great man.

The entire Festival was open to the public for free making this one generous outreach to the Clarinet Community.