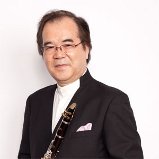 Kazuo Fujii is one of Japan's leading classical clarinet players. His warm sound and musicality captivates concert audiences and CD-listers alike.  A Graduate of the Kunitachi College of Music, Mr. Fujii was awarded the second prize in the 41th Music Competition of Japan, which led him to study in New York with legendary Stanley Drucker for two years with full sponsorship from Yamaha Japan.   He has performed numerous concerts, including performing for the emperor and the royal family of Japan at the Imperial Palace, and appearing on popular TV / Radio shows.  Also, he has released many albums from ALM Records / Kojima Recordings Inc., including "The Romantic Clarinet" "Little pieces for Clarinet" and "The Brilliant Clarinet Ensemble" (Vol. 1 - 11). Above all, his world premiere recordings of "C. Rose: 32 Études" "C. Rose: 40 Études" and "E. Cavallini: 30 Caprices" - all with piano accompaniment, received critical acclaim for his idea and musicality for transforming these compositions almost solely known as audition repertoires into artistic form. In addition to recording these works, he has arranged and published the score of Rose's Études among other compositions for clarinet.   In 1997, Mr. Fujii was invited as the Japanese delegate to "The International Clarinet Fest" in Texas, and his recital received high praise. He also is a well known educator and instructor, teaching in seminars and master classes all over Japan for over 35 years.   The founder / chairman of the Tokyo Clarinet Ensemble and the Tokyo Sereno Clarinet Orchestra, and a former professor at Hyogo University of Teacher Education, Mr Fujii is performing nationwide not only as a clarinet player but also a conductor in recent years. Kazuo Fujii is a Yamaha sponsored artist.