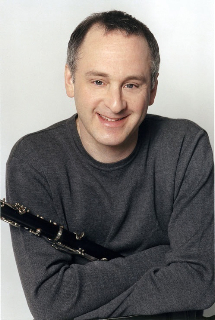 One of the most versatile and respected musicians of his generation,
clarinetist Alan R. Kay was honored with membership in the Orpheus
Chamber Orchestra in 2002 and serves as Principal Clarinet with New
York’s Riverside Symphony. He also performs as principal clarinet
often with the American Symphony Orchestra, the Orchestra of St.
Luke’s and at American Ballet Theater. Mr. Kay’s honors include the
C.D. Jackson Award at Tanglewood, a Presidential Scholars Teacher
Recognition Award, Juilliard’s 1980 Clarinet Competition, and the 1989
Young Concert Artists Award with the piano and wind sextet Hexagon
later featured in the prizewinning documentary film, “Debut.” Mr. Kay
is a founding member of Windscape and Hexagon; he appears frequently
with the Chamber Music Society of Lincoln Center and as a guest of
numerous string quartets and chamber ensembles, including the
Mendelssohn, Rossetti, Mirò, and Shanghai Quartets. A guest artist at
many of the country’s finest summer festivals, Mr. Kay returned last
summer for his second season at Bravo! Vail Valley Music Festival and
his sixth season at the esteemed Yellow Barn Festival. His acclaimed
performance of Weber’s Concerto at the 2005 Windham Chamber Festival
was heard repeatedly through the U.S. on NPR’s “Performance Today.”
Artistic Director of the New York Chamber Ensemble, his series of
thematic programs at the ensemble's Cape May Music Festival draws
growing audiences each year. Also a conductor, Mr. Kay studied
orchestral conducting as a Bruno Walter Scholar at Juilliard with Otto-
Werner Mueller and has led ensembles at Purchase College, Juilliard,
in Buck’s County (PA), Staten Island, California and New York City.
Mr. Kay taught at the Summer Music Academy in Leipzig, Germany in 2004
and teaches at the Manhattan School of Music, The Juilliard School and
Stony Brook University. In the past year, he has commissioned and
premiered new solo works by Pulitzer Prize-winning composers Charles
Wuorinen and Paul Moravec. He has served on the juries of the
International Chamber Music Festival in Trapani, Italy, Young Concert
Artists International Auditions, and the Fischoff Chamber Music
Competition. A virtuoso of the wind chamber music repertoire, Mr.
Kay has recorded CD’s with Hexagon, Windscape and the Sylvan Winds; he
also appears on many other chamber music, orchestral and new music
CD’s. He lives with his two boys, Noah and Jonathan, ages 15 and 13,
in Leonia, New Jersey.

Mr Kay is a co-founder and a director of the Clarinetopia, just inaugurated last June at the State University at Stoney Brook. Together with Michael Webster, Professor at Rice University, and Stephen Williamson, Solo Clarinetist in the Metropolitan Opera Orchestra in New York, this has evolved into one of the most important intensive clarinet workshops.

What I look for in you and bring to my teaching:

1. You must be smart, well-rounded, industrious, committed to music
and becoming a better musician.

2. You must know music beyond what's written for clarinet.

3. You must be literate and appreciate art of all discplines--read
books, go to art museums, and--of course--go to live concerts.

4. I believe in phrasing and expression the way it used to be taught--
knowledge of the score and the ability to use the instrument as the
means to great expression and compelling performance. Ending with
fingers and tonguing is antithetical to my approach.

5. By the time you finish an undergraduate program with me, you will
have played most of the basic repertoire for clarinet, including the
major concerti and solo works with orchestra, works with piano,
unaccompanied works and standard orchestral excerpts. You will also
have transposed Bach flute sonatas, done some harmonic analysis with
me, played quite a bit with piano, and performed for your colleagues
in studio class situations. I will also have insisted on memorizing
several works. You will leave a better, well-rounded and smarter
player.