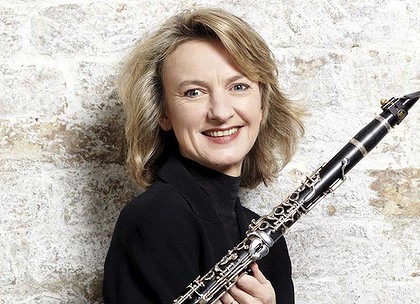 Sabine Meyer - Renowned Soloist and Chamber Music Artist;  Solo Klarinettist in the Lucerne Festival Orchestra; Founder of the Blaserensemble Sabine Meyer and the Trio di Clarone and Professor at the Musikhochschule Luebeck in Germany

Sabine Meyer is regarded as one of the most outstanding soloists of our time. It is thanks to her that the clarinet, previously underrated as a solo instrument, has reclaimed the concert stage.

Born in Crailsheim, Sabine Meyer studied in Stuttgart under Otto Hermann and in Hanover under Hans Deinzer. She began her career as a member of the Bayerische Rundfunk Symphony Orchestra. She subsequently played with the Berlin Philharmonic Orchestra as solo clarinettist, a position she left as she became increasingly in demand as a solo artist.

Since then, numerous concerts and radio and television appearances have taken her to the major musical centres of Europe, as well as to Brazil, Canada, Africa, Israel and Australia. She performs regularly in Japan and the USA.

Sabine Meyer can already look back over an unparalleled career as a solo artist. Since her debut at the age of 16, she has enjoyed success with leading orchestras both at home and abroad. She has performed with more than 80 professional orchestras in Germany and her track record of international appearances is unique amongst wind soloists.

Her repertoire as a soloist covers the pre-classical (Johann M. Molter, Johann Stamitz), the "standard repertoire" of the clarinet (Mozart, Weber, Nielsen, Hindemith) and the avant-garde. A number of composers, including Manfred Trojahn and Toshio Hosokawa, have dedicated new clarinet concertos to her. She has also rediscovered important and previously forgotten compositions for the clarinet (Sandor Veress, Berthold Goldschmidt).

In addition to her work as a soloist, Sabine Meyer is a committed player of chamber music. Unlike many other stars of classical music, she finds great value in continued long-term collaboration with other musicians.

She has performed with many artists including Gidon Kremer, Tabea Zimmermann, Heinrich Schiff, Oleg Maisenbery, Lars Vogt, the Vienna String Sextet and the Hagen Quartet - with some of them for over twenty years. She has also formed close partnerships with the Cleveland Quartet, the Alban Berg Quartet and the Tokyo String Quartet (with an international tour in 2001/02). Sabine Meyer also dedicates a significant proportion of her artistic energies to her own two ensembles, the TRIO DI CLARONE and the BLÄSERENSEMBLE SABINE MEYER. The extent of Sabine Meyer's commitment to chamber music was the reason that Claudio Abbado has appointed her as solo clarinettist for the next few years with the new LUCERNE FESTIVAL ORCHESTRA.

Sabine Meyer is also particularly interested in supporting the performance of contemporary music both at special festivals and in other settings. She included compositions by Isang Yun, Pierre Boulez, Edison Denissow and Karlheinz Stockhausen in her repertoire at the beginning of her career. It is Sabine Meyer's intention that the BLÄSERENSEMBLE SABINE MEYER and the TRIO DI CLARONE will always include contemporary music in their performances and, to this end, she has commissioned and premiered numerous compositions, including works by Jean Francaix, Edison Denissow, Toshio Hosokawa, Nicolo Castiglioni and Aribert Reimann.

A highly regarded CD containing five pieces dedicated to the Bläserensemble won the ECHO PRIZE for the chamber music recording of the year in 2001. Sabine Meyer is also committed to the avant-garde in her solo work and has premiered compositions by Harald Genzmer, Marc-André Dalbavie, Toshio Hosokawa and Manfred Trojahn.

The artist has enjoyed a close working relationship with EMI Classics since 1983. Her recorded works range from the pre-classical to the avant-garde and include all the major solo concertos and chamber music pieces written for the clarinet.

Many of these productions have received awards. Sabine Meyer has been awarded the prestigious ECHO PRIZE on six occasions (more often than any other classical artist to date) by the Deutsche Phonoakademie, including four awards for the INSTRUMENTALIST OF THE YEAR (in 1994 and 1996 for the outstanding recording of the clarinet concertos by Johann and Carl Stamitz; in 2000 for the new recording of the Mozart concerto with the Berlin Philharmonic and Claudio Abbado, and in 2003 for a recording of virtuoso pieces by Weber and Mendelssohn).

Her Brahms Quintet with the Alban Berg Quartet and the Bläserensemble Sabine Meyer, with modern pieces dedicated to the ensemble, was awarded Chamber Music Recording of the Year.

In addition to her work as a concert musician, Sabine Meyer has worked as a teacher for many years. She has held master classes in Germany, Italy, Austria, Japan, the USA, Holland, England and Switzerland and was appointed a professor at the Lübeck Academy of Music in 1993. In contrast to the expectations of many music students attending the numerous master classes held these days, Sabine Meyer does not just aim to pass on tips and tricks of the trade, but sets great store by solid basic training.

Together with her husband Reiner Wehle, Sabine Meyer has developed a carefully planned, systematic training programme that specifically addresses the issues of sound quality (embouchure, volume, tonal colours), which are often flagrantly neglected by many modern clarinettists. The aim of this programme is to combine the rich, powerful sound quality of the German clarinet with the flexible tonality of the French Boehm System. The programme places particular emphasis on the careful selection and handling of clarinet reeds.

With a combination of melody-based games and practice, Sabine Meyer places herself solidly in the tradition of the German clarinet school with its complex sound, rich in harmonics.

In addition to numerous musical awards, Sabine Meyer has also received the Niedersachsen Prize and is a member of the Hamburg Academy of Arts.

Sabine Meyer lives in the historic town of Lübeck with her husband Reiner Wehle - also a clarinet professor at the Lübeck Academy of Music - and their two children Simon and Alma. Her hobbies are cooking, reading and horse-riding. Other "members of the family" include Oskar the German shepherd cross, four horses (Sabine Meyer breeds horses) and several cats.