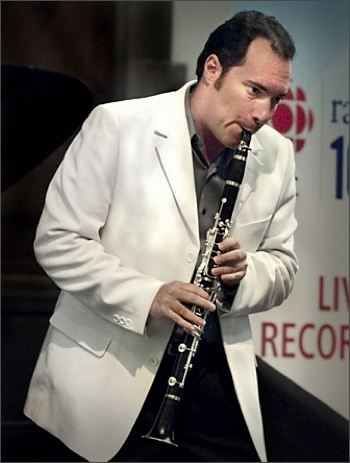 Israeli-American clarinetist Guy Yehuda is recognized as one of the most outstanding and unique talents on the international concert stage today. The top prizewinner of several international competitions, such as the Heida Hermanns and Fischoff, Yehuda was hailed by composer John Corigliano as “One of the most awe-inspiring clarinetists today.” He has toured extensively in Europe, North America, Israel and China. As principal clarinetist, he has performed with the Israel Philharmonic, Lucerne Contemporary Festival Orchestra, Chicago Civic Orchestra, Spoleto Festival Orchestra, Haifa Symphony Orchestra and Cincinnati Chamber Orchestra, among others, as well as guest clarinetist with the Chicago Symphony Orchestra. Yehuda performed on tours of Europe and the U.S. under the batons of top conductors including Pierre Boulez, Zubin Mehta, Kurt Masur and Daniel Barenboim. He performed and collaborated with the world’s top composers and performers including Pierre Boulez, Steve Reich, John Corigliano, Menahem Pressler from the Beaux-Arts Trio, and the Cypress and Harrington String Quartets. A highly demanded musician, he has performed as soloist and chamber musician at the Spoleto, Verbier, Lucerne, Ottawa Chamber Music, Parry Sound, and Domain Forget festivals, and at the Israeli Chamber Music Festivals of Kfar Blum and Haifa.

Yehuda is a sought-after recitalist throughout North America, Europe and Asia. He has performed as soloist in prestigious halls and venues such as Carnegie Hall, Domain Forget, (Canada), Chicago Symphony Hall, Palacio Fuz and Casa di Musica in Portugal, Mann Auditorium in Tel Aviv and Dame Myra Hess Chamber Series.  He has appeared regularly as a guest artist on Public Radio across the U.S and abroad, and he has been a frequent artist on a number of live recordings for CBC. His discography includes: Music by French composer Jean Francaix, on the XII-21 Canadian Label; several CD recordings with Albany records; and the most recent release of the Brahms and Reger Sonatas on the Blue Griffin record label in 2015.

Yehuda has given master classes throughout the U.S, Canada, Mexico, Europe, China and Israel. He is a Selmer-Paris and Vandoren international performing artist and product consultant. He held visiting faculty positions at Indiana University and the University of Virginia, and has been the clarinet professor at the University of North Florida. Currently, he is the Associate Professor and Artist Teacher of Clarinet at Michigan State University College of Music, and principal clarinetist with the Lansing Symphony Orchestra. He is the clarinet faculty resident at the Vianden Summer Festival in Europe, Aria International Music Festival in Massachusetts and Fresno Summer Orchestra Academy in California