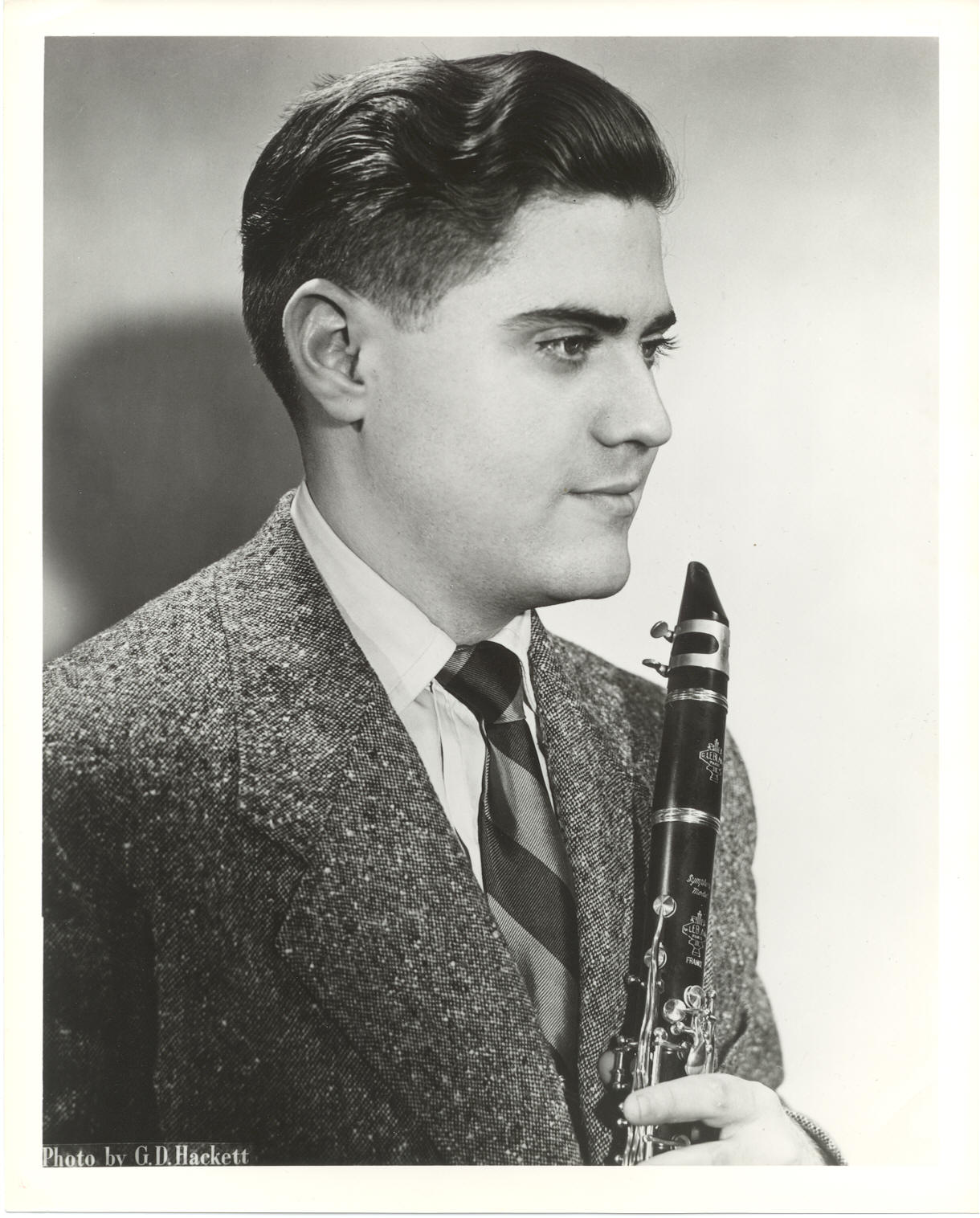 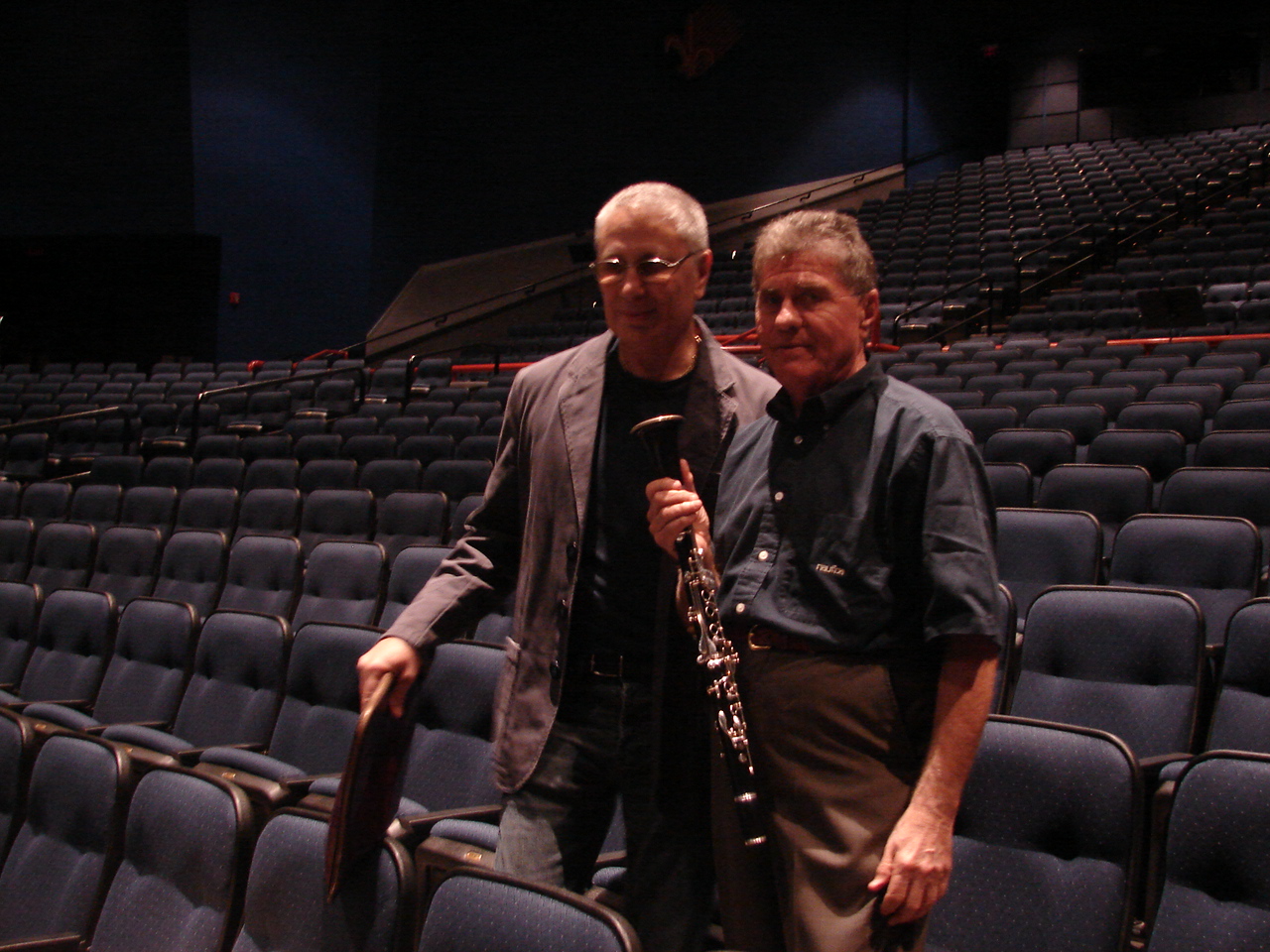 Soloist and Solo Clarinetist in the New York Philharmonic 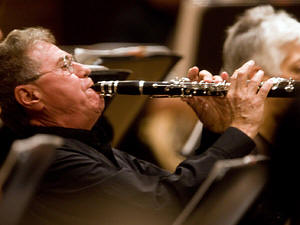 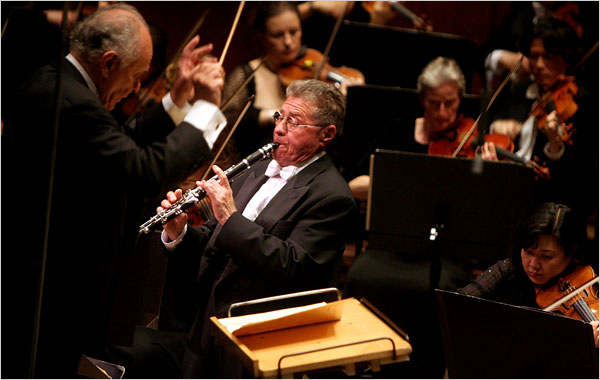 Stanley Drucker, surely one of the most important Orchestral artists and Soloists of our times, celebrates his 60th year as member of this great Orchestra and at the end of the 2009 season will retire.  This special  Honor Page is earmarked to celebrate the vital artist accomplishments of this great virtuoso and make known the elements that made him such an important icon.  At the end of the next New York Philharmonic season, Meastro Drucker will perform the Copland Clarinet Concerto with Loren Maazel conducting, who also is retiring at the end of the season.  Bass Clarinetist Stephen Freeman is also retiring.

One of the most important earmarks of a great artist, especially an Orchestral Principal Clarinetist, is the ability to not only to handle the high pressure demands of performance of all kinds and styles of literature and new music in the fully accurate technical musical sense and perform with perfect rhythmical and being flexible to the demands and wishes of Conductors, including making changes the first time as required, and, project a communicative personality as opposed to a neutral obedient to the style type player where there seems to be no heart in the musical communication from the player.  These positive earmarks are what have made Mr Drucker the top of the standard of Clarinet playing, and only a few great players have made this mark, including such as Robert Marcellus (Cleveland Orchestra), Harold Wright (Boston Symphony), Karl Leister (Berlin Philharmonic), Jack Brymer (London Symphony), and very few others. To hold a high pressure position for 60 years in an Orchestra as high status as the Philharmonic is a phenomenal track record, especially when Mr Drucker has been the most called upon in-house soloist, one time called upon in hours notice to perform the Mozart Clarinet Concerto K 622, replacing indisposed soloist Jesse Norman who became sick.

As this year ticks toward his retirement in September 2009, this page will update and document several areas of interest including tributes from several associates and students past, and galleries of photos of importance from his career and discographies of old and new recordings that should bring to light his message and legacy.

At the conclusion of the 1997-98 season, New York Philharmonic Principal Clarinet Stanley Drucker celebrated 50 years as a member of the Orchestra. In honor of this milestone anniversary, and in recognition of his highly respected and widely acknowledged musical excellence and dedication, he was named Musical America’s 1998 Instrumentalist of the Year. He has made approximately 150 solo appearances with the Philharmonic since joining it at age 19. Mr. Drucker maintains an active solo career in addition to his Philharmonic duties, appearing with ensembles throughout the world. He has been twice nominated for Grammy Awards in the category of Best Instrumental Soloist/Classical with Orchestra: In 1992 for his recording of the Copland Concerto with the Philharmonic and Leonard Bernstein, and in 1982 for John Corigliano’s Concerto with the Philharmonic and Zubin Mehta. Mr. Drucker is featured on a number of other Philharmonic recordings: under the direction of Leonard Bernstein in Debussy’s Premiere Rapsodie; in Nielsen’s Clarinet Concerto; and in the world-premiere live performance (1977) of the Corigliano Clarinet Concerto, which is a part of the Orchestra’s acclaimed CD box set, The Historic Broadcasts: 1923-1987. Mr. Drucker’s other recordings include New York Legends: Recitals with Principals from the New York Philharmonic; Schumann’s Complete Works for Winds and Piano; the Mozart Quintet for Clarinet and Strings in A, K.581, and a new two-CD set of the two clarinet sonatas, Trio in A minor, and Quintet in B minor of Johannes Brahms entitled Drucker Plays Brahms. He is also heard on the world-premiere broadcast of William Bolcom’s Clarinet Concerto, part of the New York Philharmonic Special Editions’ boxed set, An American Celebration.

Mr. Drucker began clarinet studies at age ten with Leon Russianoff, his principal teacher, and later attended the High School of Music and Art and the Curtis Institute of Music. He was appointed Principal Clarinetist of the Indianapolis Symphony Orchestra at age 16, the Adolf Busch Chamber Players at age 17, and the Buffalo Philharmonic at age 18. He has the distinction of being one of the few living orchestral musicians whose biography appears in the New Grove Dictionary of Music and Musicians.

Ending a 60-Year Gig at the N.Y. Philharmonic 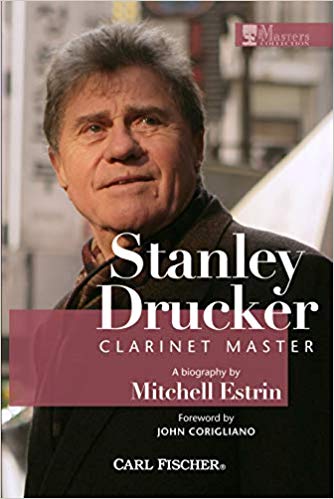 Long awaited release of Senior VIP Stanley Drucker, legendary Solo Clarinetist in the New York Philharmonic for 61 years, written and compiled by Mitchell Estrin, longtime student and Orchestral Associate and Professor at the University of Florida and President of the International Clarinet Association - ICA

Without exaggeration, this evening with Soloist Stanley Drucker performing the Aaron Copland Clarinet Concerto for the last time after over 60 years in the Philharmonic and soloist in this work over 60 times, is the most important and inspiring evening of the year.  The affection and admiration of his legacy is nothing less than awe-striking- to have a presentation at the concert before his appearance on stage, and given a standing ovation before he performed sends a telling message.  Like many other previous performances, he clearly owns the piece as stated in the National Public Radio coverage of his career.   The concert was  sold out, and the public had a generous opportunity to see in exhibit what Maestro Drucker was all about.   The numbers are on display at an exhibition in a corridor at Avery Fisher Hall that traces his career and provides clips of interviews and performances. It was organized by Amy Shapiro, Mr Drucker's biographer and a PhD candidate at the State University at Stony Brook, a former student who is writing a doctoral dissertation about the Philharmonic through his experiences. At a private preview last week, a subdued Mr. Drucker seemed moved. “It’s overwhelming,” he said softly.

After this incredible concert, Mr Drucker was honored at a reception at the nearby Empire Hotel, sponsored by Buffet-Crampon, the illustrious Clarinet makers, with a VIP by invitation attendance by 150 artists, and friends that lasted several hours with many of the most prestigious  performers, teachers in the country.  Many testimonials were read showing how Mr Drucker has had a major impact on their lives, including Franklin Cohen from the Cleveland Orchestra, Mitchell Estrin, a longtime student and Orchestral associate in the New York Philharmonic on tour for over 20 years, and many more.  A special commemorative gold coin honoring this event was given only to the invited dignitaries.  Mr Drucker's relationship with Buffet is historic.    It was Mr Drucker and the late David Weber who decided and made possible the Buffet R-13 to be made available in the USA and becoming one of the most standard setting professional clarinets used today, about 80% use these clarinets.

Another forgotten fact is the innovation and teaching influence Mr Drucker has had, having edited 6 volumes of Orchestral excerpts with International Music Company, a major staple in the Orchestral training of students headed for professional careers.  The Solo recordings produced with the New York Philharmonic speak for themselves.

Anyone who has had active contact with this great artist is the better for it.  I know very few who have had such an influence in one's life. 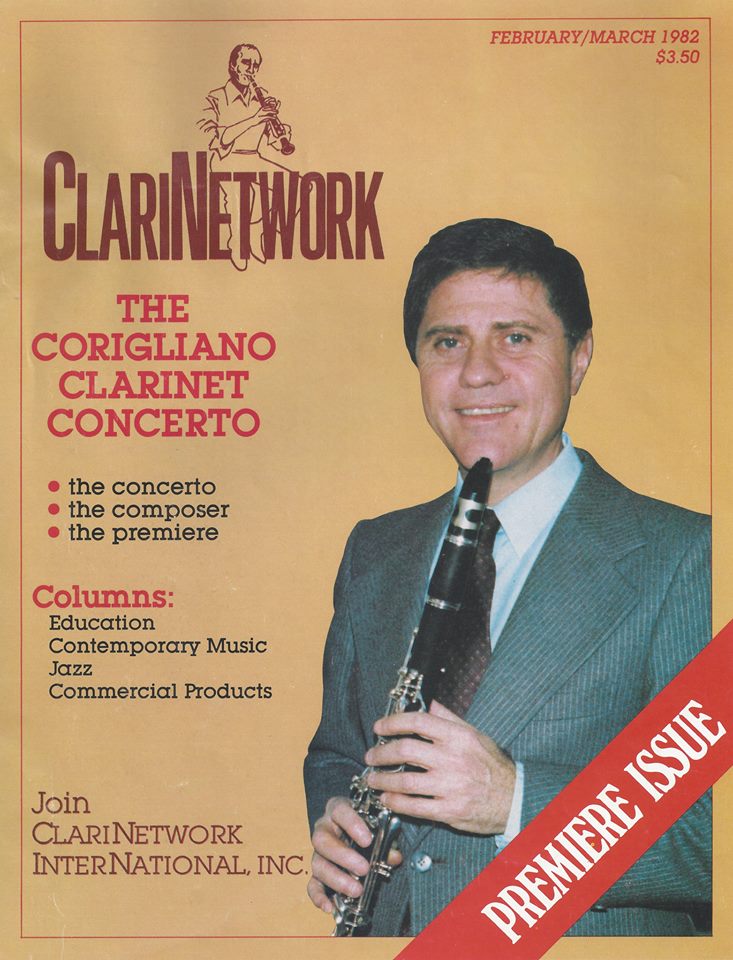