Clarinetist Michael Norsworthy was featured in the first of 2 concerts presented by Japan-USA Musical Perspectives on Saturday, January 31 – 4 PM at the Tenri Cultural Institute, 43a West 13th Street (between 5th and 6th Ave) in New York,  and upcoming on Saturday, February 7 – 8 PM at Fenway Center at Northeastern University, 77 St. Stephen Street in Boston, Massachusetts.

A dedicated and persuasive champion of the music of our own time, Michael Norsworthy has given premieres of over 80 works in collaboration with composers Harrison Birtwistle, Elliott Carter, Chris Dench, Pozzi Escot, Brian Ferneyhough, Michael Finnissy, Lukas Foss, Hans Werner Henze, Magnus Lindberg, Ralph Shapey and Marc Anthony Turnage, among others.

Acclaimed Soloist Luigi Magistrelli, Professor at the Milan Conservatory, and proactive Clarinetist in being involved with many Clarinet Competitions in Italy including the Mercandante and Viano Competitions, along with Flutist Elena Cecconi, performed the above rarely heard work for Flute, Clarinet and Orchestra.  Many unknown works like this have been played here and several other places in Europe to bring attention to their worth and repertoire expansion.  It is to their credit in bringing these kind of works to the forefront.  The previous day, 24 January, Mr Magistrelli performed the Mozart Grand Partita K361 and the Dvorak Serenade with the Haydn Wind Ensemble along with his sister Laura, another star clarinetist.  Many times, early works are performed on period instruments in which Magistrelli has a large collection that is used for performance.  He frequently performs with Karl Leister, Retired Emeritus from the Berlin Philharmonic and has several Chamber Music recordings released.  Luigi Magistrelli is a WKA Artist VIP.

The 18th Young Artists Competition held with this Orchestra gave honors to two winners, one a WKA member and Freshman at the University of Florida under Professor Mitchell Estrin, one of the most important Artist Teachers in the United States and well aligned with the New York Philharmonic as a touring player for the last 20 years.  Jenny MaClay has been a rapid developing up and coming player with an example setting quality having studied with solid teachers, and achieving notoriety as a soloist winner in many earlier young artist competitions in the Southeast United States.   What is vitally important for any young player is the drive and constant awareness and follow-up of pursuing opportunities leading to a cumulative success, and Ms MacClay has achieved that, in attending diligently Clarinet workshops, Symposiums, ClarinetFests, and achieving the distinction of attending the Buffet Clarinet Academy at younger age as a High School student against the competition to enroll by college students much older than her.  More information with a Press Release from the University of Florida below.

OCALA, FL, JANUARY 24, 2009 - Jenny Maclay, a first-year student of Professor Mitchell Estrin in the University of Florida Clarinet Studio, won the Junior Division of the Ocala Symphony Orchestra 18th Annual Young Artist Competition.  Ms. Maclay received a $1000 first prize award and will perform as soloist with the Ocala Symphony Orchestra at concerts to be presented at the Ocala Breeders’ Sales Auditorium on Saturday, April 4, 2009 at 7:30 p.m. and Sunday, April 5, 2009 at 3:00 PM.  She will perform the Clarinet Concerto No. 2 in E-flat major, Opus 74, by Carl Maria von Weber.

Ms. Maclay is a graduate of Sparkman High School, Class of 2008, in Huntsville, Alabama.  She was the only North American high school student selected to participate in the inaugural year of the Buffet Crampon USA Summer Clarinet Academy.  She has appeared as soloist with the Huntsville Symphony and is currently a member of the University of Florida Wind Symphony, Symphony Orchestra and Clarinet Ensemble.

A dream of incredible measure took place on this nationally historic day marking a new direction for the United States and solid recognition of the accomplished diversity of its citizens, and being honored on the highest terms in performing for the new President Barack Obama immediately before his swearing in as President of the United States on worldwide broadcast.  Anthony McGill, Solo Clarinetist in the Metropolitan Opera in New York, faculty at the Peabody Conservatory in Baltimore, Maryland, and a WKA Artist VIP, performed a world premiere of a new work to be specifically played for this important occasion  “Air and Quiet Gifts” written by John Williams with Artist luminaries as Yo Yo Ma, Cellist, Iztek Perlman, Violinist, and Gabriela Montero, Pianist for an audience of over 2 million who came to this event.  More information is below to grasp the significance of this memorable life-lasting event.

At noon today, Inauguration Day, the precise moment when the Constitution stipulates that a transfer of power to a new president is to occur, Barack Obama had not yet taken the oath of office. Instead, he was listening attentively to the performance of a new piece that the composer John Williams had been asked to write for the ceremony.

So President Obama’s administration was ushered in with a new chamber music work by a living American composer. Classical singers have performed for inaugurations in recent decades. But to have a new instrumental piece played was most unusual, something that should gratify classical music lovers.

The cellist Yo-Yo Ma, who was asked by the inauguration committee to organize the performance, invited three illustrious colleagues to join him: the renowned violinist Itzhak Perlman; the superb young clarinetist Anthony McGill, a principal player in the Metropolitan Opera Orchestra (and among the few black artists to hold a principal chair in a major orchestra); and the fiery Venezuelan-American pianist Gabriele Montero. The intrepid performers had to cope with performing outdoors in temperatures hovering in the mid-20s. Ms. Montero, especially, looked to be freezing and wore woolen gloves with the fingers removed. But they all managed remarkably well.

And Mr. Williams came through with a stylish and appealing four-minute work, “Air and Simple Gifts.” In high-minded contemporary-music circles Mr. Williams, the most successful film music composer in history, has endured much condescension for his work in Hollywood. But the best of his film scores are skillfully, artfully and even subtly composed. And he is a comprehensive musician who knows how to write for all orchestral instruments.

He got the mood right, I thought, in this contemplative occasional piece. President Obama, it turns out, has a fondness for the music of Aaron Copland. So Mr. Williams fashioned a work that evokes the melancholic, calmly affirming, harmonically open-hearted world of Copland.

The piece begins with a lacy, quietly searching melody for violin, soon accompanied by consoling modal piano chords. The cello joins in with a pensive melodic line that responds to the violin, while the piano gradually prods the music forward with undulant riffs.

Soon the clarinet enters, playing the first two phrases of “Simple Gifts,” the Shaker hymn tune that Copland wove into his beloved ballet score “Appalachian Spring,” using the melody as the theme for an elaborate set of variations. Though Mr. Williams riffs Copland variations closely, his treatment of the tune is distinct enough to come across as something genuine and personal. There is a jazzy episode, with pungent piano chords and flourishes for snappy clarinet. Then the instruments break into a burst of agitated, jubilant counterpoint, with the piano playing Bachian passages of busy 16th notes.

Eventually the piece turns calm again, and the music becomes reflective, with wide-spaced harmonies and quizzical, halting melodic lines does not end decisively but settles down and takes stock, for now. Befitting the occasion, it seemed like music of possibilities, with more to come.

Anthony McGill, a principal clarinetist for the Met orchestra. 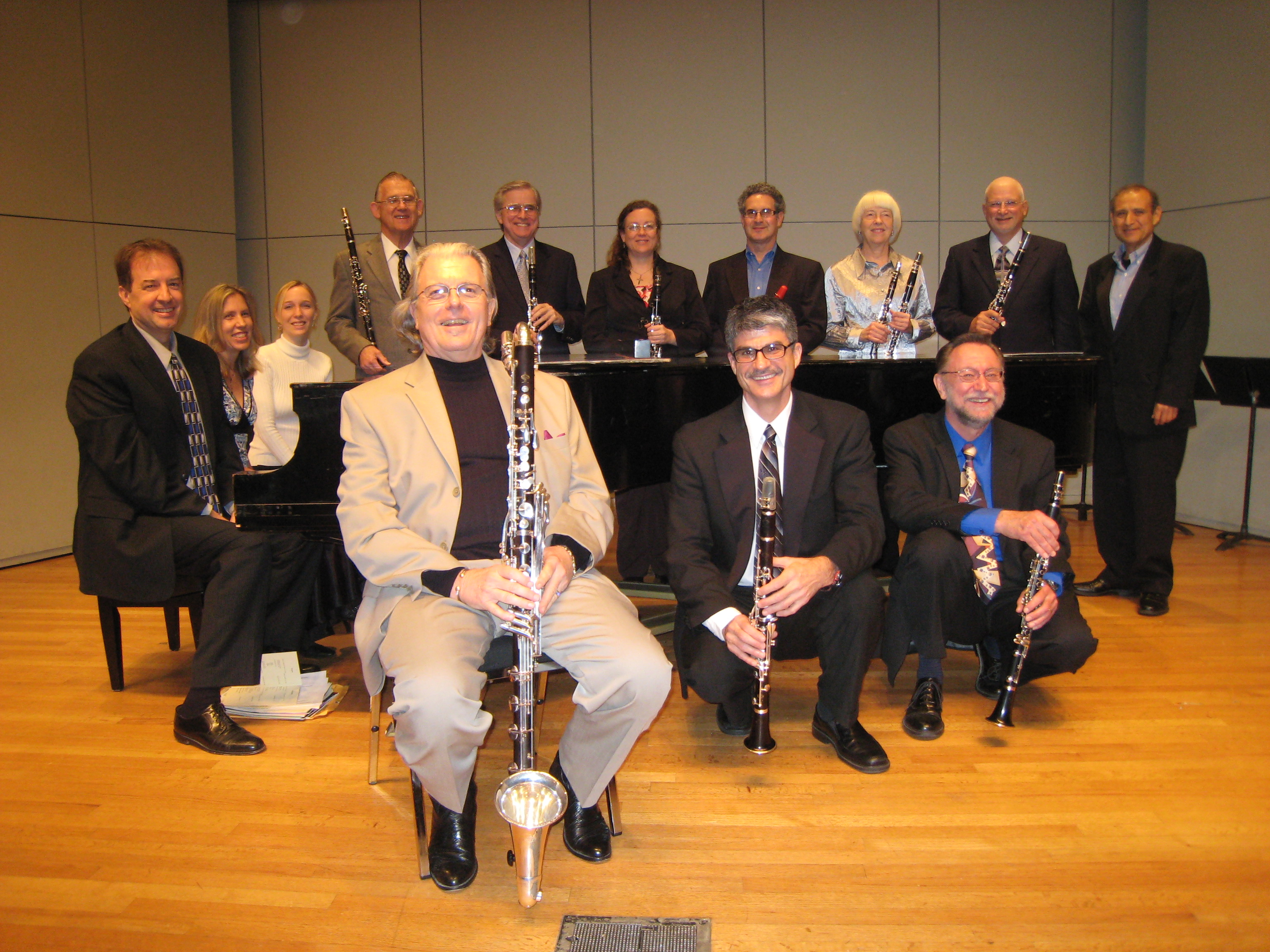 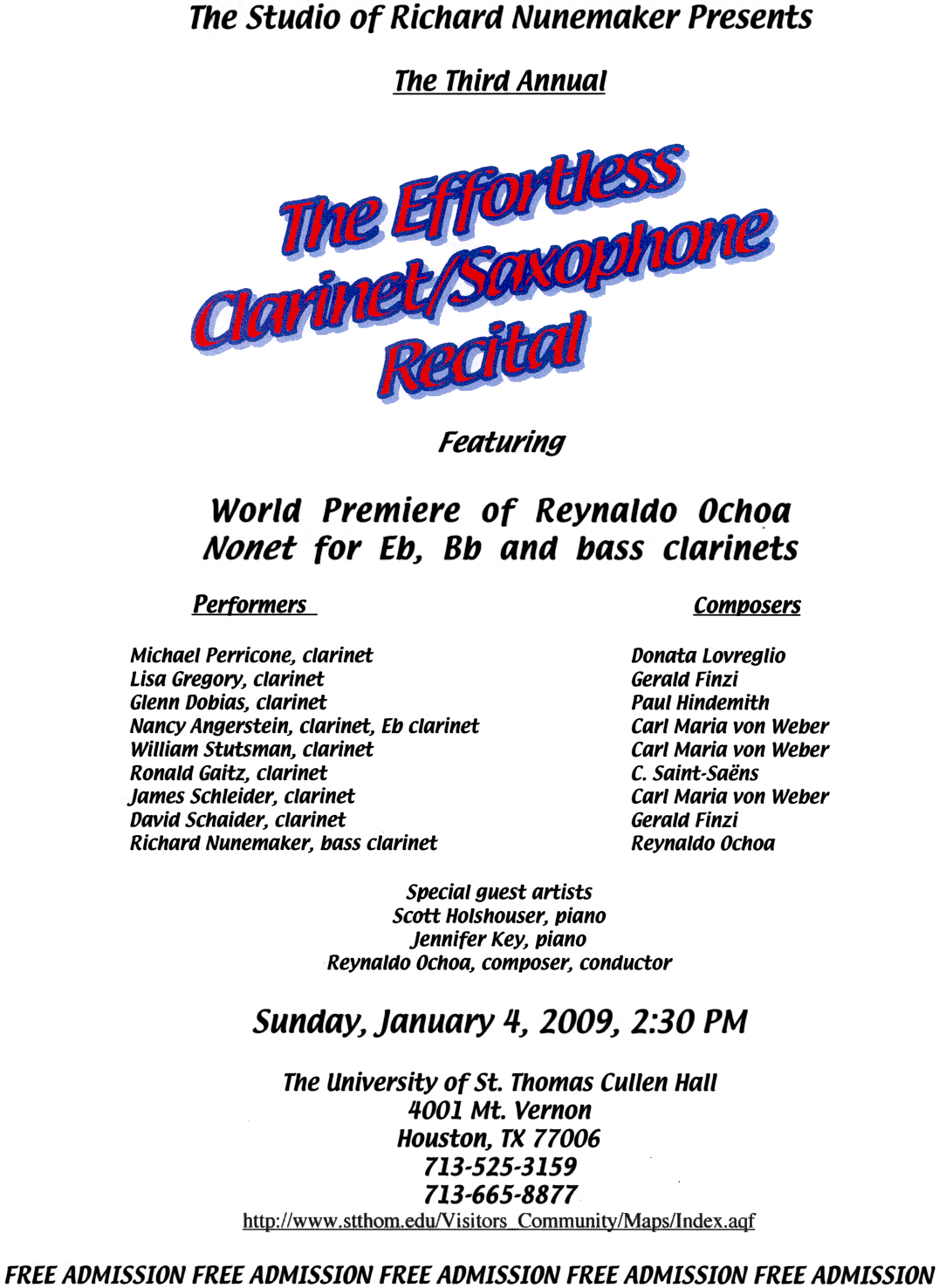 This concert is the 3rd annual one held with Richard Nunemaker, recently retired Bass Clarinetist in the Houston Symphony and Director and Professor at the University of St Thomas in Houston with an elaborately high powered Clarinet Studio with outstanding students and professionals from this area.  As the galleried programs indicate, the program had a long range of standard literature and a World Premiere of a Nonette by composer from Houston Reynaldo Ochoa, who conducted his work as the finale to the concert.    What is important to the Clarinet Community is the emergence of such talent through these studio concerts which bring credit to all involved, and spreads the good of the performance for all to take notice.