A review by Joshua R. Mietz

The day began with a recital featuring the talents of Dr. Barger along with other UNL faculty and students. Barger, in collaboration with the UNL Percussion Ensemble, under the direction of Professor Anthony Falcone, opened the festival with Five Pieces for clarinet and percussion orchestra by Phillip Parker.  Those familiar with this work will attest that it makes use of unusual combinations of clarinet and percussion instruments in a very enjoyable setting.  The recital concluded with Barger’s spicy performance of Bill Douglas’s Suite Cantando for clarinet, bassoon, and piano joined by UNL professors Drs. Mark Clinton and Jeffrey McCray.  Both works on this recital started the festival in an upbeat and exciting way!

After the host recital, the Kimball Recital Hall was transformed into a classroom for the study of clarinet.  Masserini worked with clarinetists from around Nebraska in the morning master class.  Students in this first master class ranged from 9th grade to college freshmen and showcased some well-known staples of the clarinet repertoire including:  Osborne Rhapsody, Stravinsky Three Pieces, and Hommage a de Falla by Kovács.  These enjoyable performances also lent themselves well to gleaning some valuable information from Masserini.  A pedagogical idea he discussed thoroughly was that of air speed and the allusion of a tumbleweed.  Being a resident of Arizona, he has observed the phenomena of wind’s effect on this native plant many times and explained that, whether on a tumbleweed or on a clarinet reed, the most continual and smooth movement is created by the air flowing over the top of its target.  When demonstrated by Masserini and performed by students, this new approach to the “spinning-air” concept was highly effective during both master classes.  Another concept discussed was that of the performers role on stage, after a student admitted to suffering with some stage-fright issues.  Masserini, with his gentle and easy-going personality, explained our need to “practice being calm,” settle into the piece, and “give (the performance) away” to the audience, as one would a gift.  After discussing this with the student and having her perform again, there was a marked improvement.  Masserini was able to bring out the best in these students through his clear, easy to follow instructions.

Lunchtime featured a discussion with Dr. David McClune of Union University.  McClune is a well-respected mouthpiece craftsman and has been working diligently his craft for over 20 years.  His discussion focused on the overall process of making mouthpieces.  He said, in the business of refacing mouthpieces, “we deal in dust,” to illustrate the miniscule differences between facings.  Some of the younger members of the audience were noticeably in awe after he used a few precise strokes of a file to make an ordinary mouthpiece into an exceptional one.  Further explanation revealed that sometimes he will spend a few minutes to as much as a few hours to make a mouthpiece play up to his high standards.

After lunch, the audience was treated to four wonderful performances of excerpts from Weber’s Concertino by midwestern high school clarinetists.  This is the first year of the High School Solo Competition.  Dr. Jason Blumenfeld, a clarinetist and owner of  Blumenfeld Family Chiropractic in St. Louis, MO graciously donated prizes of metronomes and gift certificates to local music retailers as well as served as a final round judge alongside Masserini and McClune. 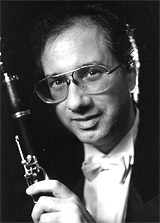 Charlie gave much insight into the creation of the Stravinsky 3 Pieces and pointed out several key note changes based on the manuscript and
other sources. In terms of practical advice, he emphasized to all the students to open up their sound by a) hold the head and the clarinet up
b) actually pushing the clarinet up somewhat and c) understanding the role of overtones on the clarinet and learning to manipulate them through the position of the lower jaw on the reed, especially in "opening up" as one moves into the higher partials. He also spend time talking about shaping and phrasing, of course, and, as I loved when I studied with him, he would sit at the piano and play the piano part while pointing out what is going on at a deeper musical level than one
often hears about in lessons.

II.
Saturday 3:30pm in the Center for the Performing Arts at ISU a Master class for ISU and other students. Four students played: Yvonne Dean
from Western Illinois University played the Spohr 1st concerto, 1st mvmt; Brittany DelSignore, senior at ISU played the 1st mvmt of
Prokofiev's sonata, Op. 94; Lucy Abrams from the University of Illinois presented the Stravinsky 3 Pieces; and Mark Donahue, freshman at ISU
played the Rossini Intro, Theme and Variations.

III.
Saturday 8pm in the Center for the Performing Arts Charlie gave a recital. The program:

Momoko Gresham played piano. It was, of course, a brilliant concert. One unfortunate event: during the 1st piece (Poulenc), Charlie kept
looking intently at the top section of his clarinet. It turns out a very large crack suddenly appeared on his new horn. Fortunately he had
brought along his other clarinets, so he switched for the second piece and everything went swimmingly afterward. Many people were just blown
away by Charlie's own composition, In Memoriam. It is touching as a remembrance of Charlie's father and is very interesting in it's use of
extended techniques. Of course all the pieces were so well thought out musically and so well performed technically that I could ramble on all
day about it. Short version: it was a great concert.

IV.
Sunday 3:15pm in the Center for the Performing Arts at ISU a chamber music master class featuring student ensembles from ISU. He heard:

Charlie gave many very useful insights into thinking and playing as an ensemble. And, just as in individual lessons, the students always come
away playing with more ease of technique, and a feeling of freedom and expression after spending time with Charlie.

This annual event attracted about 100 people on campus for Clarinet Day and had several classes, lectures, master classes, and recitals throughout the day.  Dr Druhan performed a World Premiere of a new unaccompanied solo by composer, Ted Hansen, who has just won his 12th consecutive ASCAP panel award for composition.  Ryder Naymik was the winner of the high school solo competition.  The conference clarinet choir was a 68-member ensemble consisting of middle school, high school, junior college, and college students, private teachers, and band directors.  We were really pleased to be able to host events from so many guest artists, including Greg Raden, Michael Norsworthy, Dr. Jim Deaton, Dr. Garry Evans, Adam Myers, Sharon Deuby, Ysabel Sarte, Jennifer Mendez, Melissa Behne, Jody Webb, Phillip Clements.  Exhibits were available for all to browse instruments, accessories, and have their clarinets checked and serviced.  Below is a Facebook link to see the many facets of this successful day.

Dr Druhan, a WKA Artist VIP, is to be commended for the preparation of this event along with her student staff who made this event thrive to everyone's benefit.