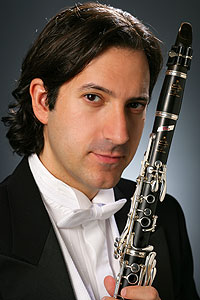 Born on August 25 1972 in Palma de Mallorca (Spain), Acting Associate Principal and E-flat clarinet, Pascual Martínez Forteza is since 2001 the first and so far only Spanish musician in the history of the New York Philharmonic Orchestra.

Martínez Forteza started playing clarinet at age 10 with his father Pascual V. Martínez, clarinet teacher of the Baleares Conservatory of Music (Spain) and principal clarinet at the Baleares Symphony Orchestra for 30 years.

In 1991, at the age of 18, he joined the Baleares Symphony Orchestra, where he performed for 7 years as second clarinet as well as e-flat and Acting Principal clarinet. After earning the Master’s degree from the Baleares and Liceo de Barcelona Music Conservatories (Spain), Martínez Forteza pursued Advanced Studies at the University of Southern California in Los Angeles (USA) with professor Yehuda Gilad, where he won first prize in the University’s 1998 Concerto Competition.

From 1998 to 2001, Pascual Martínez Forteza performed as second clarinet of the Cincinnati Symphony Orchestra (USA), also serving as Acting Associated Principal and E-flat during the 1999-2000 season. The following year (2001), he joined the New York Philharmonic as second clarinet, a position he held until the 2008-09 season. Starting in the 2009-2010 season, he is serving as Acting Associate Principal and E-flat with the New York Philharmonic.

Recently he was invited by the Berliner Philharmoniker to play Principal Clarinet under Sir Simon Rattle baton, making the world premiere of the Swing Symphony by Wynton Marsalis with Jazz at Lincoln Center Orchestra. He also is being invited by different orchestras to perform as a Principal clarinet or E-flat such as Philadephia Symphony Orchestra.

Solo performances and other projects

Martínez Forteza has appeared regularly as soloist, recitalist, and master class teacher all over the world. He has performed with numerous leading artists and frequently plays with other New York Philharmonic musicians in venues such as Avery Fisher Hall, Merkin Concert Hall, and Carnegie Hall in New York City (USA). He is a member of the Philharmonic Chamber Soloists, an acclaimed chamber ensemble of virtuoso musicians from the New York Philharmonic, and he regualry performs in the NYPO Chamber Music Series at Merkin Hall. He also recently took part at the New York Chamber Music Festival on the NYPhil Principals concert, featuring the Mozart and Beethoven piano and woodwinds quintets.

In 2001, he founded Vent Cameristic, a wind ensemble made up of professional musicians from Spain. As a soloist with Vent Cameristic, he has played every year at the Concerts d’estiú in Valencia (Spain), performing clarinet concertos by Mozart, Carl Maria Von Weber, and Artie Shaw, as well as the Concerto for two clarinets by F. Krommer and the Rigoletto Fantasy by L. Bassi. In 2003, Spanish National Radio (RNE) produced a CD featuring selections from these performances. Martínez Forteza has also made recordings for radio and television in Asia, Europe and America.

Since 2003, the duo Forteza-Nieto have performed together in Asia, Europe and the USA.

He recently made a tour in Spain with other musicians from the NYP, playing the Mozart and Brahms clarinet quintets, including important Festivals such as Xacobeo Classics (Virtuoso Series) in Galicia (A Coruña and Santiago de Compostela), and Serenates d’Estiú at the Bellver Castle in Palma de Mallorca.

Martínez Forteza has served on the faculty of the Santanyi Music School in Spain, and has given master classes at the Balearic Music Conservatory (Spain), New Jersey Clarinet Symposium, University of Southern California, Mannes School of Music, and the Julliard School (all in the USA). In 2005, Martinez Forteza, assisted by Gema Nieto, founded the Benifaio Music Festival, inviting colleagues from the New York Philharmonic to Spain for a week of master classes and concerts.

Mr. Martínez-Forteza is currently a Faculty Member at NYU New York University and regulary teaches at Manhattan School of Music.

Pascual Martínez Forteza is a Buffet Crampon Artist and a Vandoren Artist.