The concert was held in the Koepelkerk (church) and the participants as well as the teachers played. It was the first we played with
Capriccio the slow movement of the Concierto de Aranjuez of Rodrigo together with the Norwegian guitarist Trond Davidsen. With Matthias Mueller we played
the Andante und Variationen of Rossini and two students performed the first Konzertstueck of Mendelssohn with Capriccio.

The third set of the concert of the third day of the festival. We played the Concerto for two guitars (original mandolines) and Orchestra of Vivaldi

As can be seen by the performance activities and demonstrations, this was a very successful 3 days and only can grow in future endeavors with this effort maintained by Mr Beer and the Cappricio Ensemble.

Clarinet Days 08 at the University of Tel Aviv School of Music in Israel,  Sarah Elbaz, Director

The annual Clarinet Days held at the University of Tel Aviv School of Music is one of the leading Clarinet events held in this culturally rich country, a quality that should be well noted given the survival challenges the country must face.  Sarah Elbaz, a leading teacher and advocate and WKA Artist VIP, is behind the total organization and success of this program, which in past years has brought world-class artists and teachers to the programs. Past December Hot News Pages have shown details of the successes.  As the below addition indicates, the Artist roster is extraordinary and is probably the best event to date.   Of interest, Soloist Clarinetist Udi Nave wore an Israeli Army uniform as he is serving in an elite Israeli Band and is significant to note a patriotic meaning here, as all men and women are required to serve given the vital need to serve and protect their country especially in time of war, and this indicator should be an inspiration for others Internationally to know the value of one's country's service.  To perform such difficult music and be mindful of these circumstances is a full mindful.

Noted American composer Shulimat Ran, who has written a number of important contributions to the Clarinet repertoire, wrote a World Premiere that was performed this Festival with Udi Nave as soloist with the Buchman-Mehta Symphony Orchestra under Conductor Zeev Dorman.  Complete information about this piece Concerto "The Show Goes On"  contained on the Clarinet Premiere Page.

During this week a multitude of Master Classes, Clarinet ensemble rehearsals and concerts took place benefitting 120 students who attended.  It is inspiring especially for them to be in company with great Clarinet teacher/performers as Michele Zukovsky, Eli Eban, and the many other great faculty that made this a full success.  Credit id certainly due to Professor Sarah Elbaz, and it is hoped that this program gets the International recognition it deserves.

“From Gustav Mahler to Naomi Shemer”

The 2008 Clarinet Days will be dedicated to the music of Israeli and Jewish composers.

“The show goes on” – a concerto for clarinet and symphony orchestra by Shulamit Ran was commissioned for this course. The world premiere performance of the concerto titled “The show goes on” will be performed by the Tel Aviv University Buchman-Mehta School of Music Symphony Orchestra conducted by Ze’ev Dorman  and the young soloist Udi Nave

The Guest artists in the course are :

Shirley Brill - Acclaimed Soloist and Winner in the Munich Competition 2008

The concert will be broadcast live on The Voice of Music.  The concert is edited and hosted by Hayuta Dvir.

All the concerts are free admission and open to the public.

120 students participated in the course.

On the 13th and 14th of December 2008 R. Viani” International Clarinet Competition took place in  Carpi (Modena) Italy. Rino Viani was a former clarinet teacher of the Carpi Music Academy for many years. The participants of the two categories A and B came from many Italian cities, from Poland, Germany, Czech Republic, Japan, and Israel . The members of the jury were: Corrado Giuffredi, Massimo Ferraguti, Luigi Magistrelli, Anna Maria Giaquinta, Ivan Bacchi and Larry Combs, president, retired principal clarinet of the Chicago Symphony Orchestra .

The required pieces were the Mozart Concerto for the first round, Debussy Rhapsody and Stravinsky 3 pieces for the second round.

They performed the final round in a public concert the Rossini  Introduction, Theme and Variations with the string orchestra of “Tonelli” Carpi  Music Academy

Only one prize to:   Breath Quartet   ( Boschiroli,E.Patrini,R.Patrini, Vallone)  1000 Euro 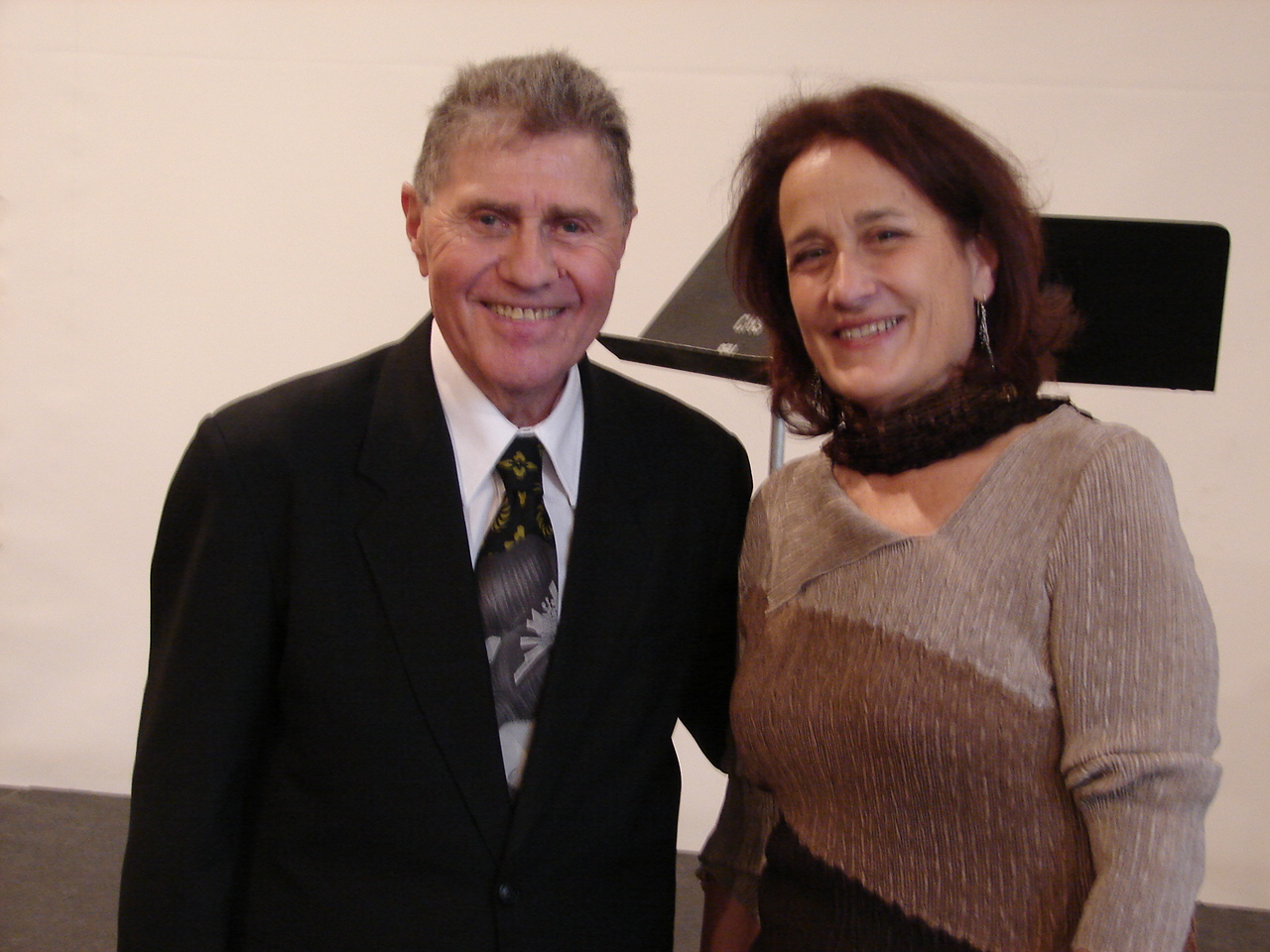 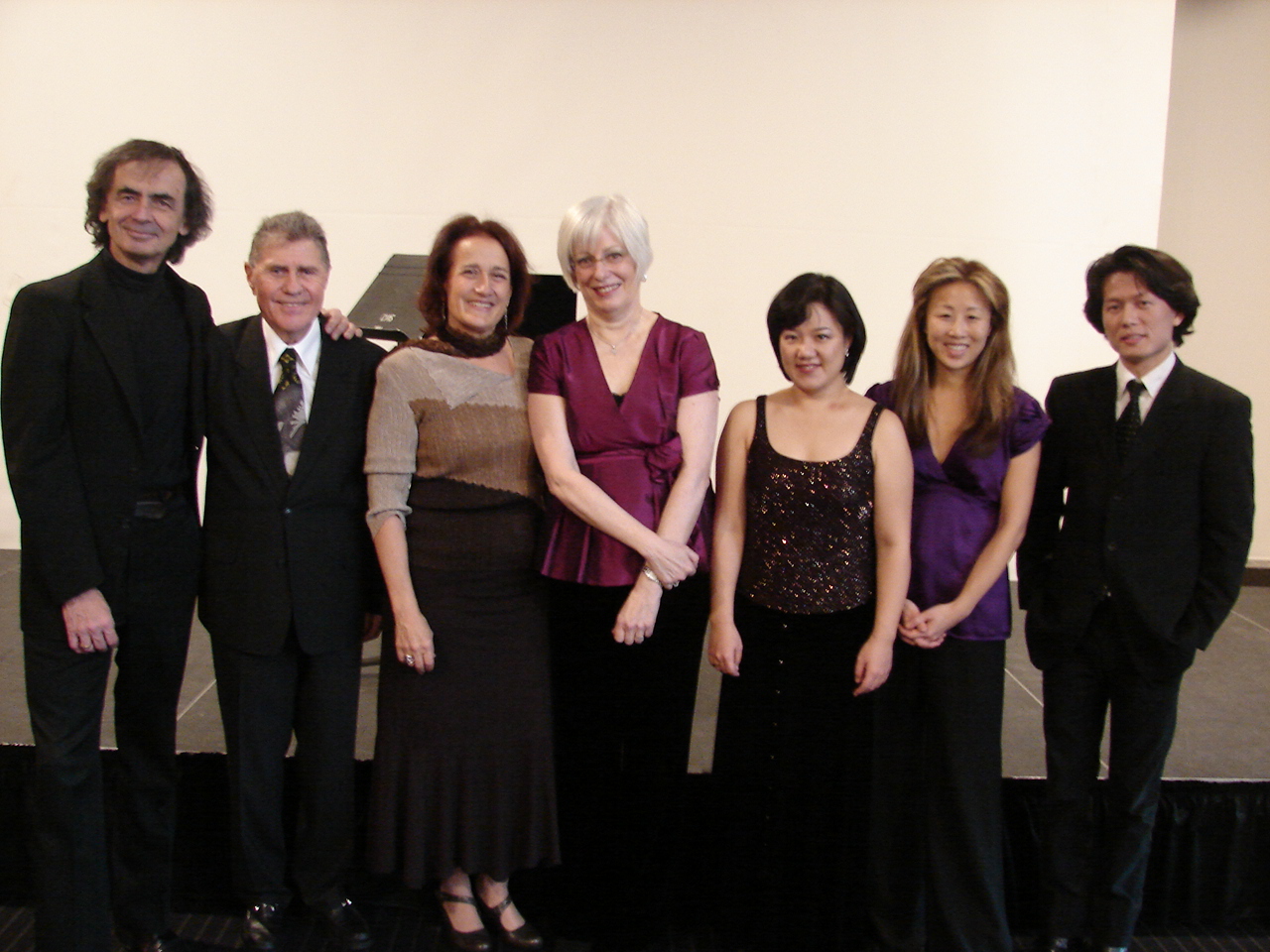 Special Birthday Concert with the New York Philharmonic held 13 December 2008 with Mr Carter present with Special Film about his perspectives, concepts, and experiences with a World Premiere of a new work Poems of Louis Zukofsky for soprano and clarinet.  The first world premiere of his music following his 100th Birthday and performance of his Clarinet Quintet

A great day for a great Dean of American Composers Elliott Carter who just turned 100 years young 11 December, and having a new work just written days before performed by Lucy Shelton and Stanley Drucker entitled 'Poems of Louis Zulovsky'.  Other works included:

The concert performance was preceded by the below discussion about Carter's musical life, development, concepts, his knowledge of the instruments, and a Movie prepared by the Philharmonic was shown to bring a broad insight to the audience so they understood what this composer is all about.  Of interest, there have been several tribute performances worldwide celebrating this great man, including a Birthday concert celebration on his birthday with the Boston Symphony at Carnegie Hall to an enthralled audience.  It is very rare to be part of Music History where the composer is present to meet and be inspired.  Two weeks earlier, the New York Woodwind Quintet gave an All Carter concert of his wind chamber and solo works at Merkin Hall.   A longtime friend and faculty at Juilliard Charles Neidich has had an influence on Carter's writing, and the Clarinet Quintet performed today was written for Neidich and the Juilliard String Quartet, premiered last April.  The concert today was a major tribute for this great man who will be with us for a very long time.

A special event and opportunity for students and professionals and teachers to have a social meet and talk shop and learn about the music and meet probably the greatest clarinetists of recent times occurred at a small Music Shop Wright Music, for 5 hours this date.  Buffet-Crampon participated with a display of several Clarinet models and made possible tryouts for students interested.  Mr Drucker was active with those attending talking about a myriad of subjects about playing, concepts, some history of his part in the New York Philharmonic, and with him Naomi who also talked much about the clarinet life.  Kristin Bertram, an artisan repair technician in New York, involved herself with an emergency repair for Mr Drucker after his clarinet dropped the day before a major concert and needed immediate attention. What is special about a meeting like this, like the Vandoren Holiday Party the week before, is the interest and connected dedication of artists to reach out and share their assets with those who can benefit from the contact, in spite of killer schedules (the last week at the NY Phil performances of the Mahler 2nd (Ressurection) Symphony, the Carter World Premiere and Carter Clarinet Quintet and a performance of the Richard Strauss Elektra with the Phil that last evening).  Refreshments were offered and the social meeting was enthusiastic.  Buffet was represented well by Chris Coppinger, Northeast Sales Manager who was on hand to assist students.  These are special all-important events that can be a permanent inspiration for all and be part of something of high importance.  Reminds of the history made the day before with Elliott Carter and the importance of being part of something.

An amazing social gathering of musicians and colleagues in the field came to this annual Vandoren Holiday Party with an inclusive array of established artist professionals and Vandoren artists and Chiefs from the firm including Host David Gould, DANSR President Michael Skinner, and very special guest from Paris Bernard Vandoren who made a special trip for this meeting.   Major legend artists from the Lincoln Center Orchestras including the New York Philharmonic as Stanley Drucker, Mark Nuccio, and from the New York City Ballet Orchestra Jon Manasse no less the multitude of freelance artists and jazz artists many who were Saxophone players and students.  Food and Vandoren Wine from France was served all day for 6 hours before a performance with the VandoJam where social was elevated with star jazz performance for another several hours. For those truly serious about their committment as musicians, this event was one not to miss, especially when the Gods are present.  To meet luminaries as Bernard Vandoren and the New York Phil luminaries is rare and never should be missed.   David Gould is held to high honors for this meeting success.

On this occasion with the 75th birthday celebration of this major Clarinetist/Teacher icon, it is worthwhile to reflect on his great accomplishments as member of the Philadelphia Orchestra and Professor at the world-famed Curtis Institute.  He carries a mantle of the Philadelphia School of Clarinert Playing having been active party with such greats as Ralph MaClain, Daniel Bonade, Anthony Gigliotti, and Ricardo Morales.  His teaching philosophy is wholly based on continuing this concept including tonal color and musical projection and purity with the beauty that projects with it.   Biographical information with his accomplishments below. 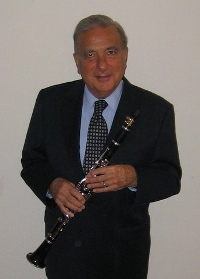 Mr. Montanaro has toured Europe and the Far East performing as a soloist and in chamber music concerts. He has also performed in many Chamber Music Festivals, including the Marlboro and Casals Festivals. Mr. Montanaro is one of the founders of the Philadelphia Chamber Ensemble and has been its music director since its inception in 1977. He has released several chamber music recordings with Boston Records.

Mr. Montanaro has been a faculty member of The Curtis Institute of Music since 1980, where he teaches both the clarinet and woodwind chamber music. His students occupy positions in many symphony orchestras including his successor in Philadelphia and principal players in Minneapolis, Pittsburgh, Cincinnati, Dallas, the Metropolitan Opera and others. He has also traveled extensively world wide giving master classes and clinics.

Aside from playing and teaching, Mr. Montanaro has helped the Vandoren Company to develop some of the most successful clarinet mouthpieces in the world.