Frank Kowalsky of Florida State University gave a masterclass and performed a solo recital at the University of Kansas on February 26, 2009. The event was very well received and the audience numbered about 150 attendees and included several noted clarinet luminaries including Fred Ormand, Larry Maxey, and Diane Barger. Dr. Kowalsky played works by McAllister, Guastavino, Stravinsky, and Baermann. He concluded the program with Mendelssohn Concertpiece Number one, which he performed with Stephanie Zelnick, Assistant Professor of Clarinet at the University of Kansas.

Fang Man’s Resurrection is a result of the 2006 Underwood New Music Readings and Commission. The work is a clarinet concerto influenced by Kandinsky’s Composition V–Resurrection in which Eastern and Western music traditions are juxtaposed. In two continuous movements, the work first utilizes Western techniques and then material from a Beijing opera titled The Battle of Jiu Jiang Kou, along with electronic manipulation of various sounds. For this premiere, ACO’s Music Alive Composer-in-Residence, Derek Bermel, is the featured soloist.

Originally from China, Ms. Fang received her undergraduate degree in composition from Beijing Central Conservatory in 2000. She was subsequently awarded a fellowship from the Cecil Effinger Foundation to pursue further studies at the University of Colorado at Boulder. Since fall 2002, she has been pursuing her Doctor of Musical Arts degree at Cornell University, where she studies composition with Steven Stucky and Roberto Sierra, piano with Xak Bjerken, and digital/computer music with David Borden. In 2006, she was one of ten composers chosen by IRCAM (Institut de Recherche et Coordination Acoustique/Musique, Centre Pompidou Paris, France) to participate in the computer and composition program.

Derek Bermel’s clarinet playing has been hailed by The New York Times as “brilliant” and “first rate.” He premiered his own critically acclaimed clarinet concerto, Voices, with the American Composers Orchestra in Carnegie Hall, and revisited it with the Boston Modern Orchestra Project, the BBC Symphony in London, and the Los Angeles Philharmonic (John Adams conducting). Bermel is the founding clarinetist of Music from Copland House, a creative center for American Music. He has premiered dozens of new works for clarinet in appearances as soloist throughout the U.S. and Europe, including recitals in New York, Amsterdam, Los Angeles, Detroit, Jerusalem, The Hague, Paris, and radio broadcasts on the BBC (London), NCRV (Amsterdam), and WQXR (New York). Bermel is also the ACO Music Alive Composer-in-Residence and will have a new orchestral work premiered on the May 1 ACO Orchestra Underground concert.

A New York Times Review is below -- 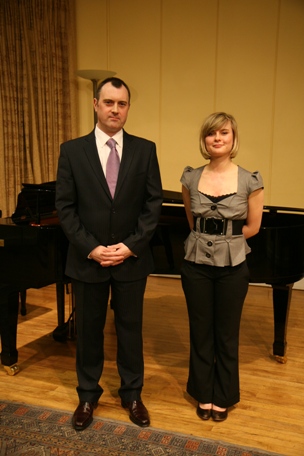 Katy Ayling started learning the clarinet at the age of seven and her keen interest in music was developed at Christ’s Hospital. She joined the Schools Military Band in her third form and by her Grecians year was made Band Captain. During her years at Christ’s Hospital she learnt Clarinet with Monica Leiher and was encouraged to go into music for Higher Education. Katy feels she has gained valuable experiences from going to Christ’s Hospital and the support she was given by the Music department in particular was fantastic. She attained a place at Junior Trinity whilst in the Sixth Form and was granted a Scholarship, along with the position of Principal clarinettist, in their Symphony Orchestra for her final year. Then Katy graduated at the Guildhall School of Music and Drama with professors Barnaby Robson and Andrew Webster.

Katy, now a 1st year postgraduate at the Royal Academy of Music, has had a lot of performing opportunities from solo, to chamber to orchestral works. She was asked to play Stephen McNeff’s clarinet concerto in November of last year with the conservatoire’s wind band she has played solo clarinet in their symphony orchestra on numerous occasions, who she will be touring with in Italy this Easter. Katy is also a member of two established ensembles; a woodwind quintet and a trio, both of which have performed several times to the public and for dinners in and around London.

She is also solo clarinet of the ULSO - University of London Symphony Orchestra.

The second Clarinet Seminar held in conjunction with the Music Department and the Band program was held at this Baltimore suburban University and Directed by Dr Marguerite Levin, who was responsible for the successful ClarinetFest 2004 held at the University of Maryland at College Park.  The 12 hour day was packed with 4 Master Classes given by herself, David Gould, Artist Director for DANSR Vandoren USA from New York, and Ralph Skiano, Solo Clarinetist in the Richmond, Virginia Symphony.  A main emphasis in the Master Classes, with handouts, was fundamentals in tone production, breath support and its supreme importance, especially covered in two sessions with Dr Levin.  Her first session included Tonal warmups and Tonguing excercises that students can use to develop these skills, and Altissimo register studies to improve upper ranges, and using skills on partials.  Participation was extensive which made these sessions very worthwhile.  Levels of students ranged from High School and College students and adults.      Mr Skiano gave an in depth class covering auditions and the Mozart Clarinet Concerto and how it is played in certain audition circumstances with surprising insights in context between playing it as a performance as compared to an audition.  Major excerpts asked for included the Beethoven 6th and 8th Symphonies with how to play critical parts.   David Gould gave a session about Vandoren's company goals and making of reeds, and mouthpieces and noting that the firm makes all in-house including machinery and tools, and the employees are trained in all aspects of both.  This makes it a unique quality oriented firm.   Gould also gave a Master Class with several students especially on fundamentals.   Many seminars and workshops consistently stress the importance of solid training on fundamentals, as without this emphasis, what is the point of even playing?

Ralph Skiano Recital and explanation of works on program

As the printed program above indicates, there were 3 major performances featuring guests Gould and Skiano, with an evening concert with the US Navy Band's 'Harbor Winds' Clarinet Quartet, who performed a first class diversified concert including serious and light music, many of which were arranged.   This gave an insight about how much music can be applied and used in this medium.

Credit is due to Dr Levin for this quality program; it is held annually at this school.  Dr Levin is a WKA Artist VIP in recognition for her accomplishments and vision supporting the Clarinetist.

The first Clarinet Symposium, held at the Performing & Fine Arts: University of Portland and under Professor Igor Shakhman, Director, offered a full day of intensive interest activities for playerws of all levels, including performances, master classes, and instrument demonstrations and tryouts.

Many of the artist faculty came from all over the United States and are active in many areas of performance and pedagogy, including William Blayney from Seattle, Washington, and member of the Seattle Symphony and Director of the Northwest Clarinet Choir, and a Director of the Vandoren Clarinet Choir Festival held last year in Seattle.  David Hattner, from Princeton. New Jersey and Solo Clarinet in The Princeton Symphony, and a Youth Orchestra Conductor, adds to the high standard of playing at this event.  The famed Monologue III of Peter Schickele for 9 Clarinets was performed by all the faculty at a concert.

This event is surely to be repeated, and it is gratifying that many events like this are happening in many locales throughout the United States.  Credit is due to all who made this a success especially Igor Shakhman and Vandoren, a sponsor who made this possible.