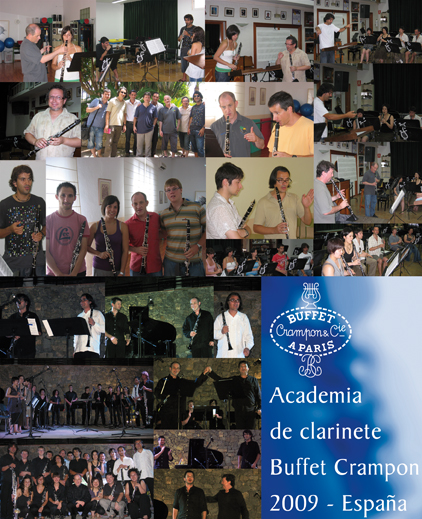 The Buffet Crampon Clarinet Academy in Spain took place this year in Altea (Alicante) from 20th to 24th July. Buffet Crampon thanks teachers  Ronald Van Spaendonck, Florent Héau, Joan Enric Lluna, Antonio Salguero and César Martin, and participants.  This program parallels the August Academy held in Jacksonville, Florida with the same and similar teaching and performing agendas serving players and students in Europe.  This is an annual event not to be missed by serious players wanting to succeed professionally

The 6th Annual Alumni Reunion and Concert was held at Fort Myer's Brucker Hall with the concert held at the Arlington Kenmore Middle School auditorium with a sold out audience.  The alumni members increased the band size by 30% and the total musical asset including the US Army Chorus, and the Herald Trumpets, used to perform at White House and International events, made a world class performance.  Several past Commanders and Officers conducted selected works and the variety in programming was full range in substance and entertaining as well.

It cannot be emphasized enough the importance of these gatherings.  Like Clarinet Conferences and Festivals, it is a place and time for musicians to unite together in a common fraternity and make music of a high standard.  Several music organizations hold these meetings, and more should be encouraged to do the same. In the Army Bands, the 3 major ones, The Army Band, The Army Field Band, and the USMA Band at West Point, and the USAREUR Band in Heidelberg, Germany, have effective Alumni Associations and are active with their members.  To link up up with your past musical colleagues and be with the present members makes one feel like they're part of something bigger than themselves.  This makes a trip for this worth it all.