As all professions avail themselves of the furthering of their respective fields, there are special people who become icons and role models for all members and others to admire, emulate, and hold special respect for their accomplishments and service to their field of calling. The World Clarinet Alliance, as part of its mission to effectively promote the Clarinet Profession, has promoted these ideals through exposure of accomplishments by all levels of players, teachers, students, and others connected to the Clarinet and Music field.

Listed below, with an increasing list updated frequently, are Artist VIP's who have been bestowed this status from the above attributes. Many of these artists wear the Official WKA Artist VIP Polo Shirt recognizing their position with WKA and the profession. These artists represent the pinnacle of the field, as Orchestral members and soloists, Professors, Jazz Soloists, Instrument Artisans, and others. 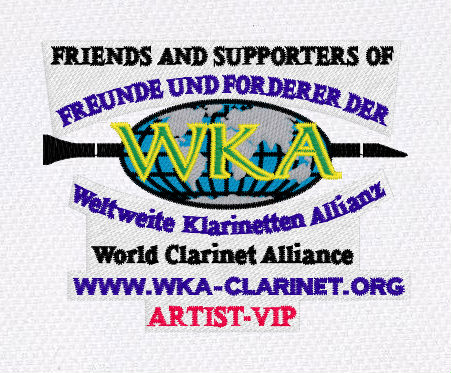 Mariam Adam - Renowned Clarinetist and Founding member of IMANI Winds in New York, The TransAtlantic Ensemble, and co-founder of the AdZel Duo, specializing in Ethnic Music with 2 Clarinets

Deborah Andrus - Second and Eb clarinetist with the Allentown Symphony Orchestra, and member of the SATORI Chamber Ensemble and the East Winds Quintet;  Artist-Lecturer in Clarinet at Moravian College and Lehigh University

Diane Barger - Hixson-Lied Professor of Clarinet at the University of Nebraska School of Music and a member of the Moran Woodwind Quintet. She currently serves as principal clarinet with Lincoln’s Symphony Orchestra

Jan Jakub Bokun - Acclaimed Soloist and Professor at the Wrocław Academy of Music in Poland and Artistic Director of the Clarimania Music Festival in Wroclaw, Poland

Chad Burrow  - International Soloist; Professor at the University of Michigan at Ann Arbor

John Corigliano -  Renowned American Composer,  Pulitzer Prize Recipient and Chair of Composition at the Juilliard School and Distinguished Professor of Music at Lehman College, City University of New
York, which has established a scholarship in his name

Anthony Costa - Professor at Penn State University; member of the

Yehuda Gilad  -  Renowned International Clarinet Pedagogue, Conductor - Professor at the University of Southern California and the Colburn Center for the Arts

Laura Grantier -  Senior Chief Musician, Section Leader and Soloist with The United States Navy Band in Washington, DC and Director of the Navy Clarinet Day held each Fall in Washington

Gary Gray - Renowned Studio Clarinetist in Los Angeles;  Professor at the Herb Alpert School of Music at the University of Southern California (UCLA)

Harri Mäki - Principal clarinet of Tapiola Sinfonietta, the Lecturer of Clarinet in Sibelius Academy in Helsinki and the Artistic Director of the Crusell Music Festival in Uusikaupunki, Finland

D Ray McClellan -  Renowned Soloist, Chamber Music Artist, Past Director of the ClarinetFest in Atlanta in 2006; Professor at the University of Georgia

Sabine Meyer - Renowned Soloist and Chamber Music Artist; Founder of the Trio di Clarone and Professor at the Musikhochschule Luebeck in Germany

Jean-Marie Paul - Major authority on Clarinet Reperoire and Director of Publications and Communications with Vandoren Paris; A founding member of the World Clarinet Alliance - WKA in 1988 in Stuttgart, Germany

Marie Ross - International Authority on Performance of Clarinet Historical Instruments; Associate Principal Clarinetist with the French orchestra, Ensemble Matheus (Jean-Christophe Spinosi) where she performs everything from Mozart on the 5-key classical clarinet to premieres of contemporary works by composers like Guillaume Connesson on the modern clarinet

Antonio Tinelli - International Soloist, Professor of clarinet in the Music Conservatory "E.R. Duni" of Matera as well as a Visiting Professor at the Academy of Arts of Tirana, Italy; Artistic Director of  the International Clarinet Competition "Saverio Mercadante"

Anna Vinnitsky -  Pre-eminent Concert Pianist, Chamber Music Artist, Pedagogue, Accompanist for many of the Premier Clarinetists Internationally - Faculty at both St. Luke’s School and Lucy Moses School at the Kaufman Center in New York City as well as a staff accompanist position at the Mannes College of Music

Rasa Vitkauskaite - World Renowned Pianist and Chamber Music Artist; faculty at the Concord Conservatory of Music and Pianist with the  Boston Philharmonic Orchestra

Reiner Wehle - Solo Klarinettist in the NDR Orchestra in Hannover Germany; Founding member of the Trio di Clarone, and Professor at the Luebeck Musikhochschule